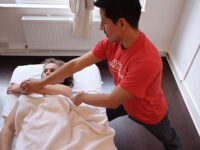 Jīng (Chinese: 精; Wade-Giles: ching1) is the Chinese word for “essence”, specifically kidney essence. Along with qì and shén, it is considered one of the Three Treasures Sanbao 三寶 of Traditional Chinese Medicine or TCM. Jīng is stored in the kidneys and is the most dense physical matter within the body (as opposed to shén which is the most volatile). It is said to be the material basis for the physical body and is yīn in nature, which means it nourishes, fuels, and cools the body. As such it is an important concept in the internal martial arts. Jīng is also believed by some to be the carrier of our heritage (similar to DNA). Production of semen, in the man, and menstrual blood (or pregnancy), in the woman, are believed to place the biggest strains on jīng. Because of this, some even equate jīng with semen, but this is inaccurate; the jīng circulates through the 8 extraordinary vessels and creates marrow and semen, among other functions.